Philadelphia basically invented independence, so of course we’re going to do the Fourth of July up right. Back in-person (and back on the Parkway for its finale), Philly’s annual Independence Day bonanza kicks off on Juneteenth and runs through (you guessed it) July 4th. You get 16 days of free activities that not only celebrate freedom, but also highlight so much of what Philly has to offer. From free museums to “Go 4th & Learn” educational kids’ activities to events that spotlight our incredible local music and food (hello, Wawa Hoagie Day), it’s all on display and ready for the whole city to enjoy.

But there’s so much to do, it’s almost overwhelming. So, to help you get the most out of the festival’s activities, we’re breaking it down for you. Looking for all the free museum days? Free concerts? Free hoagies?! We’ve got you covered.

Let’s start with the big show because it’s not July 4th without fireworks. Welcome America has not one, but three spectacular displays: 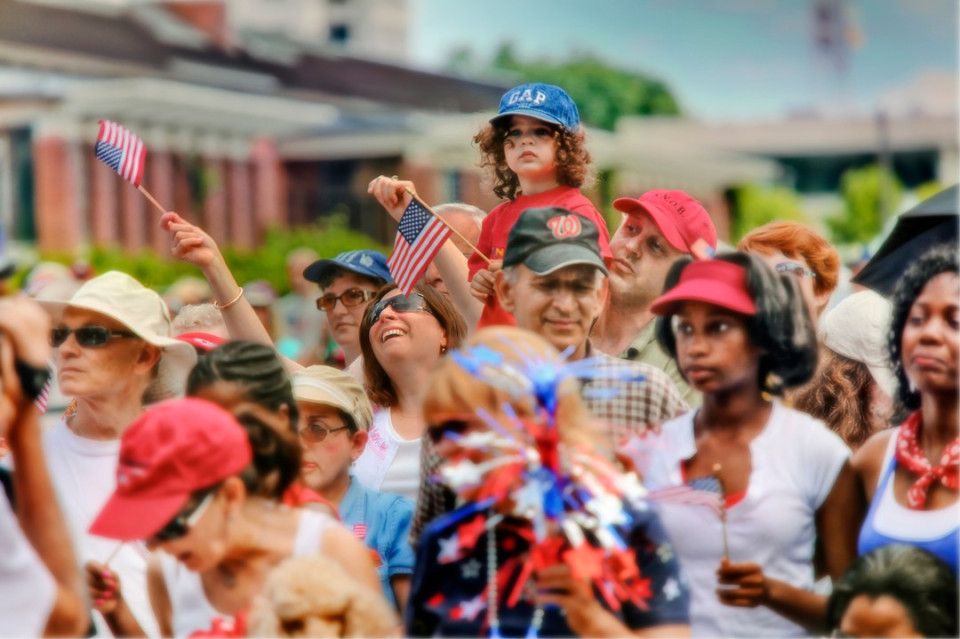 Photograph by by G. Widman 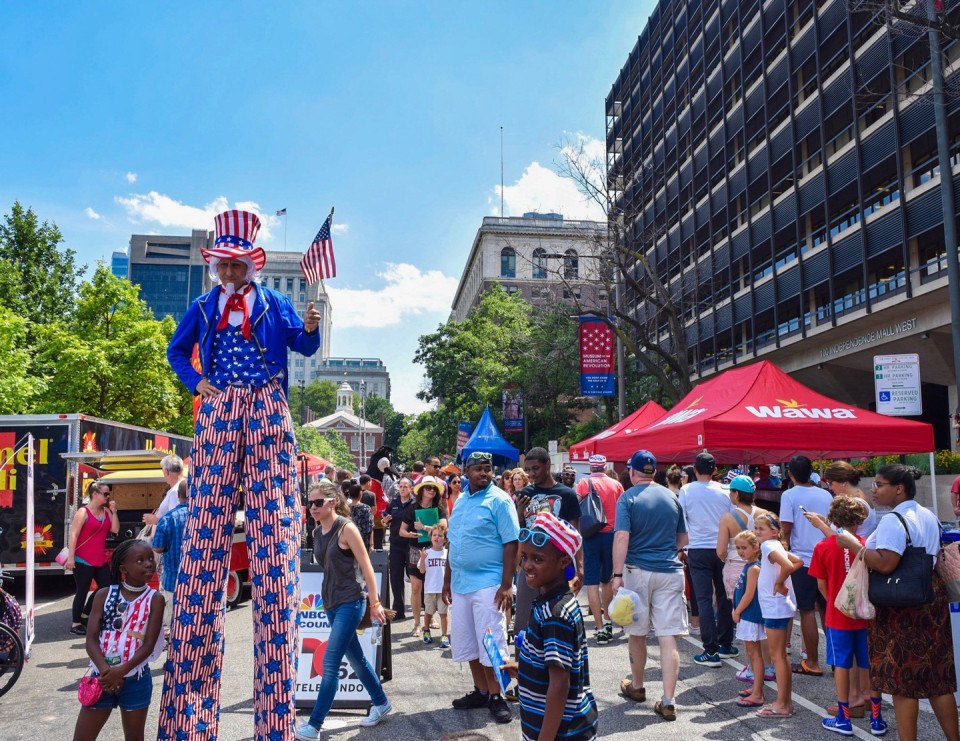 Philly @ the Movies: Rocky
A Welcome America tradition. Bring your own blanket and gather on the Art Museum steps for a screening of the iconic classic. June 23rd, 7-9 p.m., Philadelphia Museum of Art, 2600 Benjamin Franklin Parkway.

Avenue of the Arts Block Party
This party has everything. Live performances, dance lessons, art-making, food trucks, a zip-line across Broad Street … Wait, what? That’s right, in addition to the Kimmel Center hosting live performances from their upcoming Broadway series (including Moulin Rouge), this party also involves the opportunity for you to slide down a 120-foot slide or zip across a 100-foot zip-line! Plus, participate in chalk art with Mural Arts Philadelphia, take a Lion King dance workshop with teaching artists from Disney Theatrical Group, and enjoy additional live performances by Bill Jolly, Rated Art, and Zo featuring lead singer Gina Castanzo from NBC’s The Voice. June 25th, 11 a.m.-7 p.m., Broad Street between Locust & Pine streets and Spruce Street between 15th & Juniper streets.

Wawa Hoagie Day
The best day of the year! Is that too much of an exaggeration? We don’t think so. Seven tons of free Wawa hoagies will be served at noon on Independence Mall, along with a performance by Six String Soldiers of The U.S. Army String Band. When you’re done eating your hoagie, head across the lawn to the National Constitution Center, which conveniently has free admission that day. June 29th, noon-2 p.m., Independence Mall. 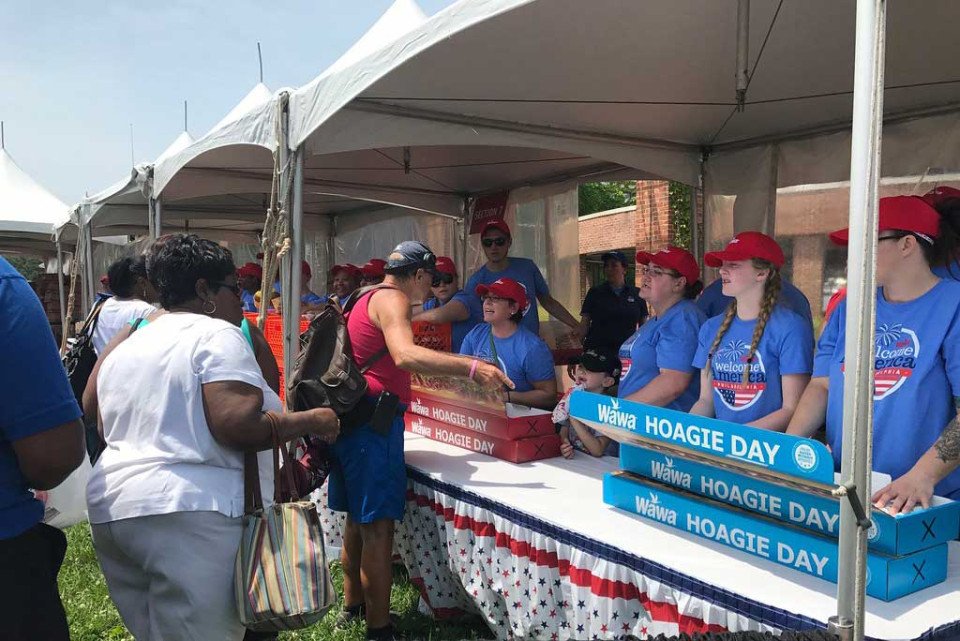 Party on the Parkway
The grand finale of Welcome America is a full day of celebration on the Parkway, including plenty of food, two stages of live performances, and more entertainment. There will also be a Kids Zone with fun activities and book giveaways. Stick around after the party for the free concert and fireworks display over the Art Museum. July 4th, noon-7 p.m., Benjamin Franklin Parkway. 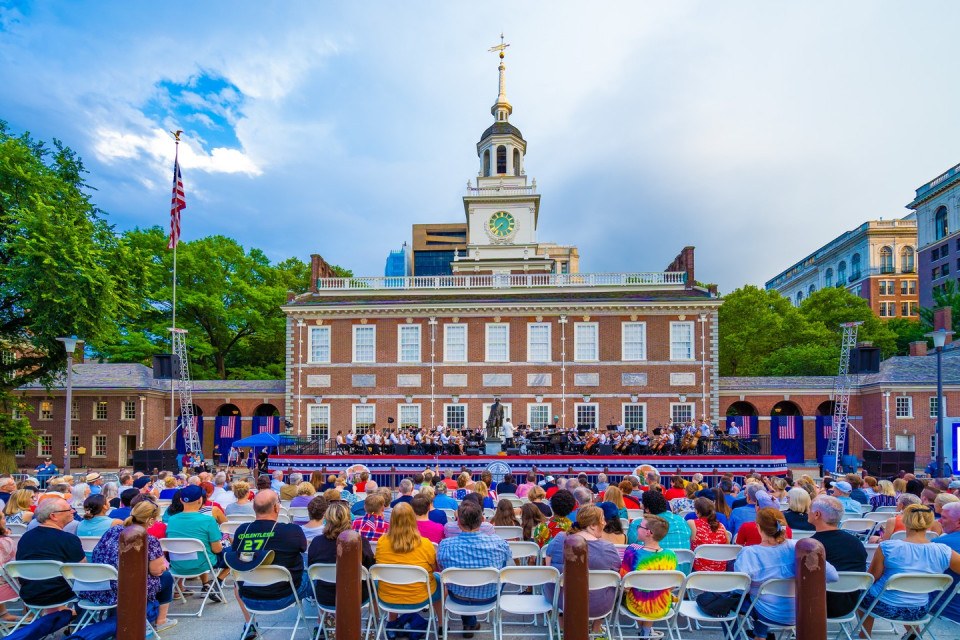 Army Field Band on Independence
The U.S. Army Field Band presents “America the Beautiful,” a musical performance that honors our country and its veterans. Bring your own chairs and blankets. The concert starts at 7 p.m., but come early because starting at 5 p.m., the Bourse will have food vendors on 5th Street between Market and Chestnut, and you can also catch a performance by Rev. R2 and Da’ Crew. June 24th, 7-9 p.m., Independence Mall.

Gospel on Independence
Bring chairs or blankets for Ode to Freedom, an evening of joyful music hosted by WDAS’ Patty Jackson. Yolanda Yvette Adams, alongside the Welcome America Mass Choir featuring churches from all across the city, sing in honor of Harriet Tubman’s 200th birthday. Limited seating is available on a first-come, first-served basis, so bring your own blanket (or chair). The Bourse will again be out there at 5 p.m. with food, so your dinner plans are made. June 26th, 7-9 p.m., Independence Mall.

Our America Now: Expressions of Freedom
More an “immersive experience” than a straightforward performance, artists from Olive Dance Theatre and We The People Stage will use spoken word, dance and song to tell “personal and historical stories rooted in passionate expressions of freedom.” This event will also have DJs, food trucks, and interactive activities, and will be followed by fireworks on the Delaware River Waterfront at 9 p.m. July 1st, 6-10 p.m., Cherry Street Pier, 121 North Columbus Boulevard.

Celebration of Community and Culture at Esperanza
The day kicks off with a block party featuring Latin food, music, and vendors. Then, head inside the Esperanza Arts Center for performances by Argentinian pianist Emiliano Messiez and his quartet, and performances and dance lessons with members of the Philadelphia Argentine Tango School. July 2nd, 11 a.m.-3 p.m., Esperanza Arts Center, 4261 North 5th Street.

Pershing’s Own Concert (and Waterfront Fireworks)
Gather at Penn’s Landing for a concert of old standards, new hits, and patriotic tunes by the U.S. Army’s band, followed by a spectacular fireworks display above the Delaware River. July 2nd, 7-9 p.m., Great Plaza at Penn’s Landing.

POPS on Independence
This concert is a Philadelphia tradition (going on 44 years!) enjoyed by 15,000 attendees each year. The Philly POPS orchestra will perform a patriotic, entertaining show featuring singer and songwriter Ryan Shaw. Bring your own chairs and blankets. Starting at 5 p.m., the Bourse will bring entertainment, food, and fun outside the food hall. July 3rd, 7-9 p.m., Independence Mall.

Wawa Welcome America July 4th Concert
It all culminates in the big headline concert on the Parkway, this year featuring Jason Derulo, Tori Kelly, and Ava Max. The celebrations continue with a dazzling fireworks display set to music by DJ Ghost and Q102. You can also watch live on NBC10 and TeleXitos. July 4th, 7-10 p.m., Benjamin Franklin Parkway. 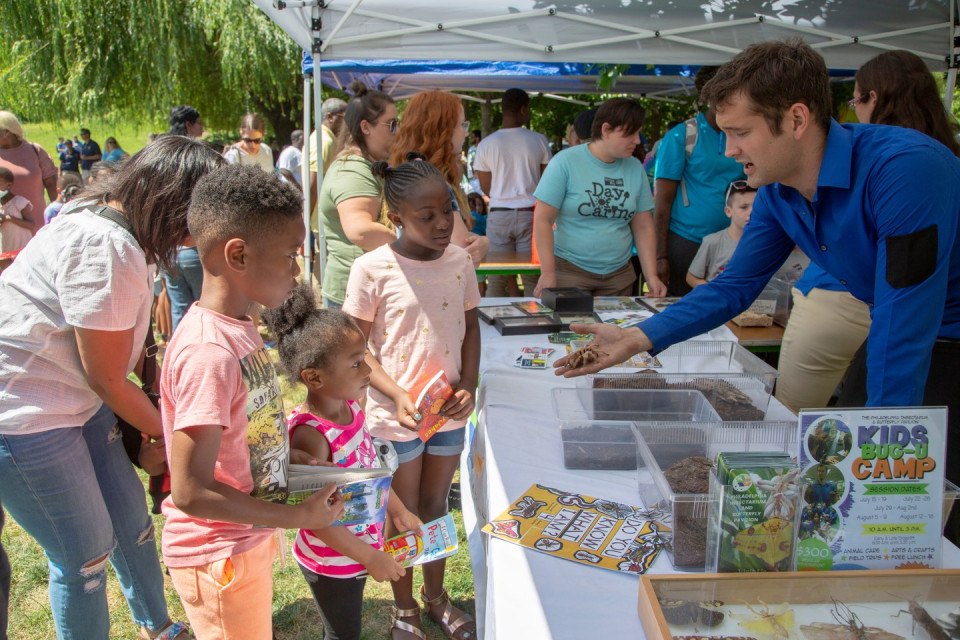 Sports, STEM, Music and More
Come to University City for a morning of sports fitness and educational activities for kids. Kids who want to be active can play soccer with the Philadelphia Union, or drum to the beat with the West Powelton Steppers and Sixers Stixers. As for the STEM part of the day, there will be hands-on experiences from the Franklin Institute, Philadelphia Insectarium & Butterfly Pavilion, and Penn Food and Wellness Collaborative. Kids can also get creative with the Philadelphia Museum of Art and listen to a story from the Free Library. June 22nd, 10 a.m.-noon, 31st and Walnut streets (lower level).

A Cultural Journey at Franklin Square
Welcome America overlaps with the Philadelphia Chinese Lantern Festival, so come to the grounds for free to see the colorful, larger-than-life installations and even learn about lantern-making with the Asian Arts Initiative. The morning will also feature performances, storytelling, a tai chi class, face-painting, and more. June 28th, 10 a.m.-noon, Franklin Square, 6th and Race streets. 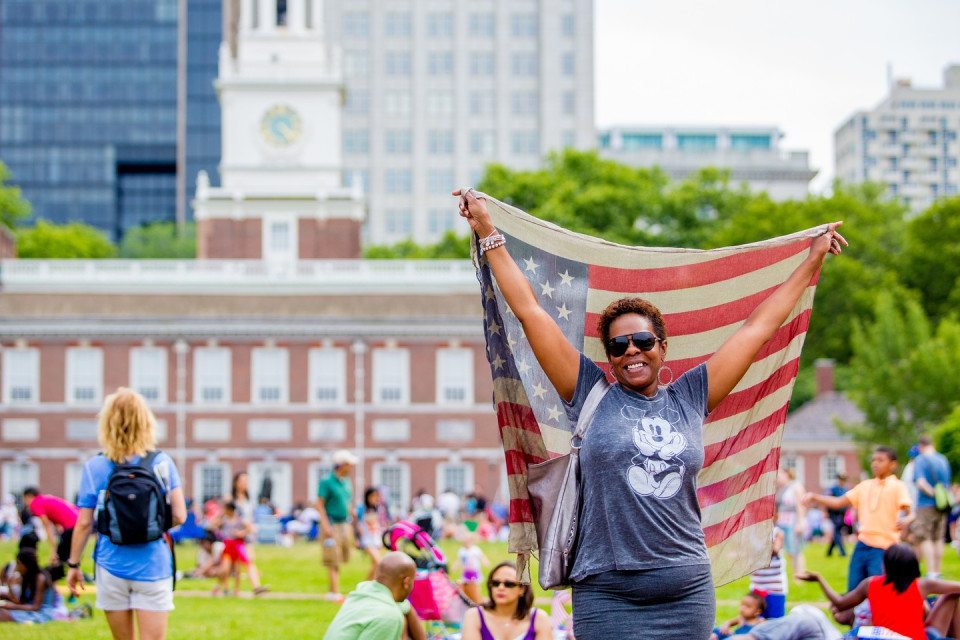 And finally, it wouldn’t be Wawa Welcome America without the opportunity to explore dozens of our museums for free! Every day of the festival, at least one cultural institution opens its doors to guests. Some of them, keen readers may notice, are always free, but they still want to get in on the celebration, so good for them! Anyway, here’s the schedule: