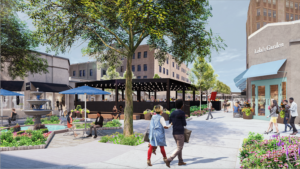 Ardmore’s Suburban Square in Lower Merion County is one of the oldest outdoor shopping centers in the country, and the owners Kimco Realty have made several additions to it in recent years. Now the next construction phase is about to begin, writes Richard Ilgenfritz for Mainline Media News.

The latest expansion is planned for Coulter Avenue.

Six properties sit on the 1.69-acre site that is planned to be combined for the construction of a new mixed-use building.

A total of 213 parking spaces will include a mixture of an underground lot and a surface lot behind the building.

“The entire garage will be EV ready,” said Mike Ogden of Kimco Realty Co. “Again, it’s where we’re headed, so we’ll be prepared for it. As more and more cars go to electric so that we can continue to switch over.”

Since the project was first approved in summer 2019, it has undergone some modifications. Twenty-one residential units were removed while 275 square feet of retail space was added as well as some parking space removed.

While the current plan for the building wouldn’t be compliant with today’s zoning code, it was submitted under the township’s older zoning code.

Only three commissioners voted against the project, and ultimately the plan passed.